WE ARE WELL TRAINED & CERTIFICATED

Most airguns are either single shot or require a bolt action to cycle.
And there are some semi-automatic airguns as well.
But as the title mentions, Hatsan has delivered a fully automatic PCP airgun.

Hatsan
For the uninitiated, this Turkey based airgun and shotgun producer is known for producing both rugged and
powerful airguns.
Hatsan is popular in a wide array of airgun disciplines. Such as hunting, long range shooting,
and your average back yard plinking.

The Hatsan Blitz
Hatsan is known for delivering some awesome airguns. And they do it very well.
The Hatsan Blitz is one of the new airguns from their line-up.

Obviously, the main feature of this air rifle is its full-auto fire.
This airgun has a fire rate of approximately 1000 to 1100 rounds/minute.

What does the Hatsan Blitz offer?
Out of the box, the Hatsan Blitz has a sturdy and powerful feel.
The “tactical” synthetic stock is of a very decent quality and the system feels rugged and reliable.
As per usual, we’ll take a look at the features of the airgun and discuss how it works.

Select fire
On the left side, there is a fire selector (also commonly known as “the fun switch”).
This switch can change the rifle from semi-auto, to full-auto fire. 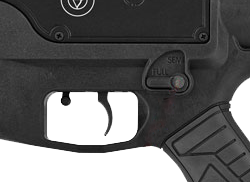 In both fire modes, the rifle uses a piston system inside the barrel shroud to cycle the
bolt.
This system is fully mechanical and does not require any electronic parts.

Magazines
The rifle comes with 3 self-indexing magazines.
Thanks to the included wrench, the magazines are rather easy to wind and load. (But to be honest, it's just as easy without it)

Rails
On top of the airgun is Hatsan’s iconic “double rail”.
This rail accepts both 9-11mm and 22mm optic mounts.
On the bottle there are three 22mm picatinny rails for mounting accessories like lasers, lights, bipods, etc.
The side rails is also used for mounted the included sling swivel.

Carbon fiber bottle
Thanks the materials of the 580cc bottle, this airgun maintains a very decent weight of about 4kg (8.8lbs).
This bottle can be filled up to 250 bars (3626 psi). Thanks to this, the Blitz can shoot up to 100 shots effectively.
Of course, the shot count at optimal velocity will always be lower.
When the bottle runs below 100 bars, the bolt doesn’t have enough energy to cycle and the bottle requires a refill.

What is this airgun used for?
This is a question commonly asked with the "special" airguns.
The Blitz is potent enough for small to medium game hunting/pest control. And the semi-automatic function allows a quick follow-up shot.
But the full-auto function isn’t recommendable for hunting/pest control (unless you want to saw something in half).
But what the full-auto is fantastic at, is being fun.
Delivering 1000 pellets/minute, the Blitz sure brings a smile to every shooters face. (Until he needs to buy new pellets)